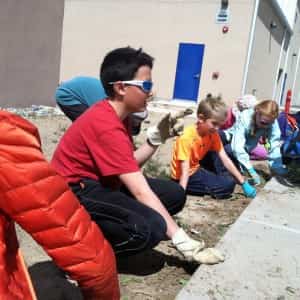 Mack-Boulder sixth graders recently returned from an amazing trip organized by the World Leadership School. The trip was WLS’s Collaborative Leadership Program set in Pueblo de Cochiti, which is located 35 miles southwest of Santa Fe, New Mexico. It is the main town in a 54,000-acre Native American reservation, home to 1,175 Pueblo members. The students left on a Sunday morning and returned to Boulder five days later.

“World Leadership School seeks to empower young leaders to find innovative solutions to the world’s pressing problems.” This philosophy tied in well with Mack’s IB approach to learning. The Mack-Boulder sixth graders spent the week making new friends and getting to know about the cultures (Native, Spanish, and Mexican) at the Cochiti school. They spent time learning and working on service projects with students at the school but also had a great time playing games and just enjoying each other, as well. Keira said, “It was cool to see what their school was like. I liked the weeding and the dirt spreading. The coolest was when we found the toad!” 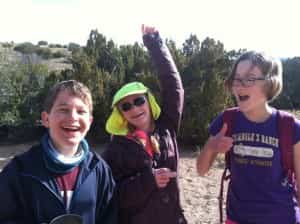 “To preserve their Pueblo traditions and cultural practices, including the Keres language, the people of Pueblo de Cochiti have instituted programs dedicated to teaching and educating the younger generations. They continue to work the land honoring a core agricultural tradition and connection to the earth. Bread making, dances and feast days continue as they have for hundreds of years.” The community was welcoming and friendly to the students. One evening a storyteller from the Pueblo joined the students at the campsite to share stories with the children. Another evening they were invited to Cochiti Pueblo proper. One of the women of the Pueblo opened her home and taught them how to make traditional fry bread. Some of the local children gave the students a tour of the Pueblo and taught our students some of their favorite games. Alden said, “It was really fun to see all the people selling their handmade jewelry and other products. I enjoyed meeting the vendors and talking to them.” Another evening a local jewelry maker spent time with the sixth graders. 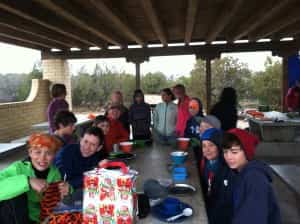 The trip was initially intended to be primarily a service trip, but it evolved into being a cultural exchange trip, as well. It also ended up being a great experience in independence: the sixth graders set up and took down their own tents at the reservation camp site, and they took turns helping with meal prep and cleanup. “It was cool to help with some service projects and to get to know about different cultures, but overall it was just awesome to get to know some new kids who we actually had a lot in common with. They were all really nice,” said Toby.