Picture an election characterized by thoughtful debate, collaboration across parties and genuine 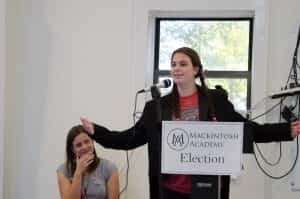 respect between candidates – that’s precisely what Mackintosh Academy Littleton has just accomplished! For the last month and a half, Mackintosh Academy Littleton participated in its first ever Mackintosh Student Body Presidential Elections. With a strong desire to show students the democratic process first-hand, Middle Years Program Teacher and Leadership Council Advisor, Megan Rich, decided to create a unit for her Individuals and Societies and Design classes that would give the whole school the authentic experience of campaigning and choosing a Student-Body President. She set up this six-week student election unit to mirror the U.S. election process directly, from authentic party conventions to “I Voted” stickers on Election Day.

In order to give every middle schooler a strong role in the process, six Leadership Council 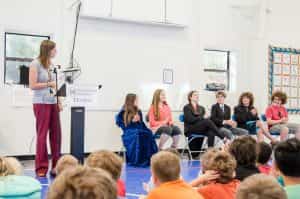 representatives — Gillian, Katherine, Lila, Quinn, Sam, and Tanner—all ran for President with the help of fellow middle schoolers who served as Press Secretaries, Technology Coordinators, and Field Directors. The process started with party conventions, where teams set their platforms, decided on parties, and brainstormed brand strategies. They then decided on plans of action for reaching out to every last student throughout the school and even to the larger community. During the primary elections, for example, campaign teams wrote and gave stump speeches to the whole school, created websites (including interactive blogs, surveys, infographics, and platform information), and participated in a press conference with local media outlets, 5280 Magazine and The Littleton Independent. Representative delegates (classroom teachers and administrators) then held caucus-like discussions with their classes to choose their top three candidates. Their votes in the primary elections narrowed the field to three Presidential candidates (and the three others then joined forces with these candidates as Vice Presidential candidates). 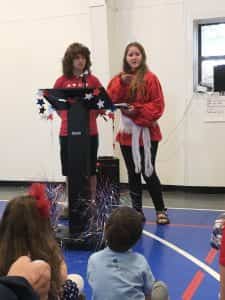 For the general election, campaign groups combined platforms and created a united front in all communications, including revising their websites as needed and changing their messaging, giving them the authentic experience of consensus and prioritization. Campaign teams then did a lot of on-the-ground campaigning in classrooms and created video ad campaigns to spread these new messages. This part of the process culminated in a debate between candidates on Monday, November 7th where Presidential and Vice Presidential candidates had to answer hard-hitting questions from the moderator and the live audience. On Tuesday, November 8th, all students voted in the general election, and on Friday, November 11th, the community inaugurated Katherine and Sam as the first Student-Body President and Vice President of Mackintosh.

Throughout the process, it was amazing to see the compassion, respect, and kindness between the candidates and among the campaign teams. They truly represented the absolute best in fair democratic processes, and the whole school learned first-hand about the civic duties of voting for representation. Teachers throughout the school were amazed at how engaged their students were in the process, and discussions surrounding both our election and the US-wide election took on a greater depth because of their direct participation.