[av_textblock size=” font_color=” color=”]
On April 14, at Mack Littleton’s annual auction, Mr. Joe Pausback spoke about his twenty years at Mackintosh Academy, his gratitude to former Heads of School Trip and Whitney Mackintosh, and what he has learned over his two decades as a Mackintosh teacher. Below is the text of his speech, but to get the full impact, please watch the video and absorb Joe’s inimitable humor and style.
[/av_textblock] 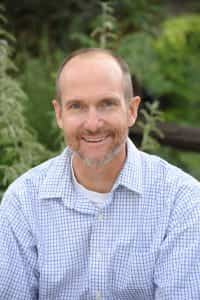 I’m Joe Pausback, and I have taught the fifth and sixth grade students at Mackintosh Academy for the last 20 years. My wife, Lara, teaches the first and second grade class.  My son Samuel, started in the Pre-K and graduated last spring. He is currently a freshman at Littleton High School.  My other son, Henry, is in the sixth grade at Mack, having started in Pre-K as well. From these overlapping roles and relationships, I have garnered a few insights about the nature of gifted education.

It is amazing to me that I would be up here talking to you about the essence of gifted education. You see, I was that child – the youngest of a large family, the one who tried to slip between the cracks.  My grades were all over the place, more a barometer of my interest in a particular subject than a measure of my actual aptitude. The late 70’s and early 80’s in Aspen, Colorado was not a time or a place where people discussed attentional issues. For me, medication was outside the classroom, in the forests, mountains, snow-fields, rivers, and canyons of western Colorado and Utah.

But somehow I persisted in school, developed a knack for getting things done on my own timetable, earned a college degree, got a teaching license and in the fall of 1998 wound up in the office of Trip Mackintosh to interview for a fifth and sixth grade teaching position. In that moment, I lacked both the experience to accurately portray the true sense of confidence necessary to land a job or the improv skills to project a fake sense of confidence. Together Trip and I paged through my student teaching portfolio. Offhandedly he remarked, “You look like a duck, but you do not yet quack like a duck.” I should have been offended, but the truth of this statement was too much to deny.  Last fall, when Trip and Whitney were back on campus for the 40th anniversary, the three of us laughed about this interview and Trip’s comment. In the interview, Trip had asked me to describe what I knew about gifted education. At the time, I had no answer. I knew nothing.

So, true to my own humble calling, after 20 years at Mackintosh, with two gifted children of my own, I finally have an answer to Mr. Mackintosh’s question. And here, tonight, in this room, I will finally complete my Mackintosh interview by answering that question.

Mr. Mackintosh, there are five things I  know about gifted education.

Trip did not offer me a job as a fifth and sixth grade teacher. Instead he offered me a job as a third and fourth grade co-teacher. Six weeks later, he had to fire the teacher who he had hired in my place. That night, he and Whitney called me up. They said that they wanted me to take over that job, but not until the following year as I was still growing in my skill set.  This was the most compassionate thing they could have done. The following fall, I took over the fifth and sixth grade class, and together Trip and Whitney nurtured me through my first two years teaching. 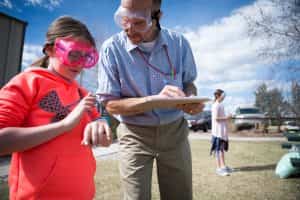 I am grateful to Trip and Whitney for giving me this opportunity. In fact everyone in this room owes them a debt of gratitude. They took over Mackintosh at a moment when it was about to go under. This was a big sacrifice to them personally and to their immediate family. But they got the school on stable financial footing and put it on track to be what it is today. If your child has ever had a PE class with Patty Weston, you should know that they hired her. If your child has ever completed a unit of inquiry that was designed by Sharon Muench, they hired her too. If you child ever took a “shaving cream spelling test” or shared a piece of cheese with Mindy Lambert at recess, know that they hired her as well.

In my interview, Trip said, “I want Mackintosh to be the best school for gifted children in the world.  Period.”  We live that vision every single day.  Thank you for your time tonight.
[/av_textblock]